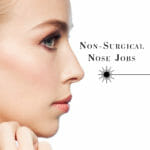 For many men and women, a nose that fits the symmetry and dimensions of their face can be an important aspect in their lives.  The nose is the most central and prominent aspect of a persons face and it is able to bring together all of the features of a person’s face like beautiful symphony.

Through careful and precise injections, Dr. Nakatsui is able to correct minute bumps, imperfections, and even enhance your nose bridge.  Dermal filler nose augmentation is a great non-surgical option for those wanting to address certain issues they have with their nose with minimal downtime.  It is also a great treatment for those who already had a previous rhinoplasty procedure and would like to correct minuscule imperfections.

If you have any questions or you would like to book a complimentary consultation with Dr. Nakatsui, please contact our clinic at (780) 482 – 1414.

For your convenience, Botox and filler appointments, as well as Coolsculpting, Thermitight, and HydraFacial MD appointments can be booked directly online or by calling the office directly at 780-482-1414. There is a $100.00 refundable deposit required to reserve an appointment using the online booking service (please note there is a $20.00 administrative fee deducted from this deposit). If you cannot find a convenient time using the online scheduler, please call as there may be additional appointment times available that are not visible online.

For all other services, please call to schedule an appointment.

Fields marked with an asterisk (*) must be filled out to complete this form. 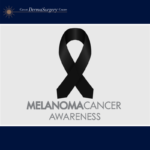 Did you know that in 2017, approximately 7,200 Canadians were diagnosed with Melanoma?  Melanoma is the most dangerous form of skin cancer that has been on the rise in Canada and across the world.  If melanoma is diagnosed early, there is a high probability of successful treatment and curability!  Staying vigilant and examining all lesions on your body regularly can help you stay on top of our skin health.

Here is a case example of melanoma with Dr. Nakatsui. 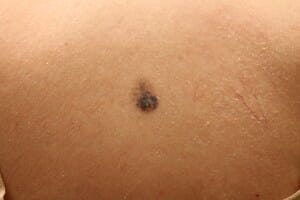 What made Dr. Nakatsui concerned about the mole? We can look at the ABCDE’s of mole checking.

A – Asymmetry: The mole is asymmetrical in shape. If you draw a line through the middle, it is not perfectly symmetrical.

B – Border: The border is uneven and ill-defined. Malignant melanomas typically have uneven, scalloped, or notched borders.

C – Colour: The colour variation in this mole was subtle; however there are elements of light and dark brown, and even some shades of dark blue. Having a multitude of colours in a single mole can be a warning signal. These colours can be reds, browns, blues, whites, and/or blacks.

D – Diameter: The physical size of the mole was another concern for Dr. Nakatsui. The mole was approximately 2.0cm x 1.6cm in size. Malignant melanomas usually are larger than a pencil eras in diameter (6mm), but many malignant melanomas can be smaller than 6mm in size when they are first detected.

E – Evolution: This patient noted that the mole had changed in a relatively short period of time. It grew in size rapidly and it changed in colours within a few months. Any change in colour, shape, elevation, or any other trait, or even new symptoms such as crusting, bleeding, or itching should be examined by your family doctor or dermatologist.

It can be difficult to determine whether a mole is good or bad and the best way to be certain is to have your family doctor or dermatologist examine your moles.

Keep tabs on your moles – Take monthly photos of any or all moles. Use a ruler and place it beside the mole and take a photo. A couple weeks to a month later, take another photo with the ruler again and determine if there is any change to the mole in size, shape, colour, etc. If you do note changes, it is time to see your doctor.

There is a genetic component as well.  Ask your immediate and extended family members if they have had melanoma.

When in doubt, check it out!