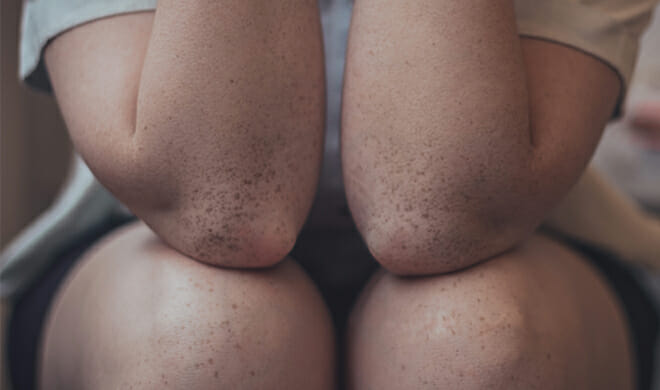 Pigmented lesions that tend to be brown or black in colour are caused by an excessive number of pigment-producing cells in the skin, known as melanocytes. When stimulated by hormonal changes or exposure to ultraviolet light, the melanocytes produce large amounts of melanin, resulting in dark discolorations of the skin. Actinic keratoses, lentigines (age spots or liver spots), freckles, and melasma are common examples of these changes in the skin. A trained eye (dermatologist) and/or a pathological reading are often needed to distinguish between these lesions.

Are there any treatments for brown spots?

There are a number of treatment options for these conditions, which can include cryotherapy (cold therapy with liquid nitrogen), chemical peels, surgical removal, bleaching creams, and lasers. Lasers have made a significant impact on the safe and effective treatment of brown spots. Discrete, well defined lesions such as liver spots may be removed by pigment removal lasers, such as the Alexandrite and PicoWay lasers, or vaporizing laser, such as the CO2 laser. Phototherapy (light) treatments, such as the Limelight, are used to remove diffuse, multiple lesions.

What are Actinic Keratoses?

Repeated, prolonged sun exposure may cause skin damage, especially in fair skinned individuals. Sun damaged skin becomes dry and wrinkled and may form rough, scaly spots called actinic keratoses. These rough spots remain on the skin even when the crust or scale is picked off. Treatment of actinic keratoses may require removal of the defective skin cells. which have escaped sun damage.

Sun damage is permanent. Once sun damage has progressed to the point where actinic keratoses develop, new keratoses may appear even without further sun exposure. Avoid excessive sun exposure, and protect all exposed areas of the skin using a broad-spectrum sunscreen, such as Anthélios 60 or Neutrogena Ultrasheer 55.

How are actinic keratoses treated?

Actinic keratoses are not skin cancers, however they may become cancerous, therefore it is usually a good idea to remove them. Statistically, if an individual has multiple actinic keratoses they may have a 20% chance of developing skin cancer, especially if the lesions bleed or have changed in size or shape.

– Actinic keratoses can be removed surgically with a scalpel and a scraping instrument called a curette. This technique is often used when a sample is required of the lesion for microscopic analysis (biopsy).
– Cryotherapy with liquid nitrogen is frequently used when the lesion appears to be innocent. The liquid nitrogen freezes the lesion causing it to blister, separate from the skin and eventually shed.
– When there are many actinic keratoses 5-fluorouracil (5-FU), also known as Efudex 5%, applied twice daily for 2-3 weeks can destroy the sun damaged cells.
– Chemical peels may also be used in the event of multiple actinic keratoses.

Any spots that don’t disappear should be re-checked, as they may represent an early skin cancer that requires removal. The cure rate for skin cancer is very high.

A lentigo, or lentigines (plural), is a small, flat, sharply delineated, colored area of the skin. There are no texture changes or variation in thickness of these lesions.

There are many sub categories of lentigines therefore diagnosis by a dermatologist is recommended as some lentingines may indicate underlying systemic disorders. That being said most lentigines are benign and can be removed for cosmetic reasons. These lesions become more obvious and may increase in number with exposure to the sun.

How are lentigines treated?

Treatment is not necessary. However, if a patient wishes to make their lentigines less obvious sun avoidance and the use of sun screen are advised. Makeup can be used to camouflage the lesions. Pigment removal lasers such as the Nd:Yag and the Alexandrite lasers are often used to remove lentigines especially from the face and hands (age spots).

Freckles are referred to medically as ephelides which are flat, tan colored spots found on the skin. They usually appear in large numbers, particularly in areas of sun exposure. They tend to get darker with sun exposure. Freckles are common in Caucasian individuals with red or blond hair. Most freckles are benign and of no medical consequence.

How are freckles treated?

Treatment is not necessary. However, if a patient wishes to make their freckles less obvious sun avoidance and the use of sun screens are advised. Makeup can be used to camouflage the lesions. Phototherapy (light) treatments such as the Limelight could be used to remove larger areas of multiple, diffuse freckles.

Melasma, sometimes called the “mask of pregnancy” or chloasma, is a condition where the pigment cells in the skin are overly sensitive to a woman’s hormones and light. Sunlight, even through the window, or fluorescent lighting could sometimes darken the skin. It can be a difficult condition to lighten, despite numerous concoctions that are available by prescription or over the counter.

How is melasma treated?

Medicated Cream such as Dr. Groot’s Bleaching Formula #3 applied nightly generally controls melasma. The treatment of melasma may take many months. Some patients will respond quicker than others.

The second component to the treatment of melasma is the regular, diligent use of sunscreens such as Anthélios 60 or Neutrogena Ultrasheer 55.

On average 80% of patients are usually 80% lighter within eight months, in cases where bleaching agents and sunscreens are used.